In the new uzbekistan human values, the benefits of the people are the highest values 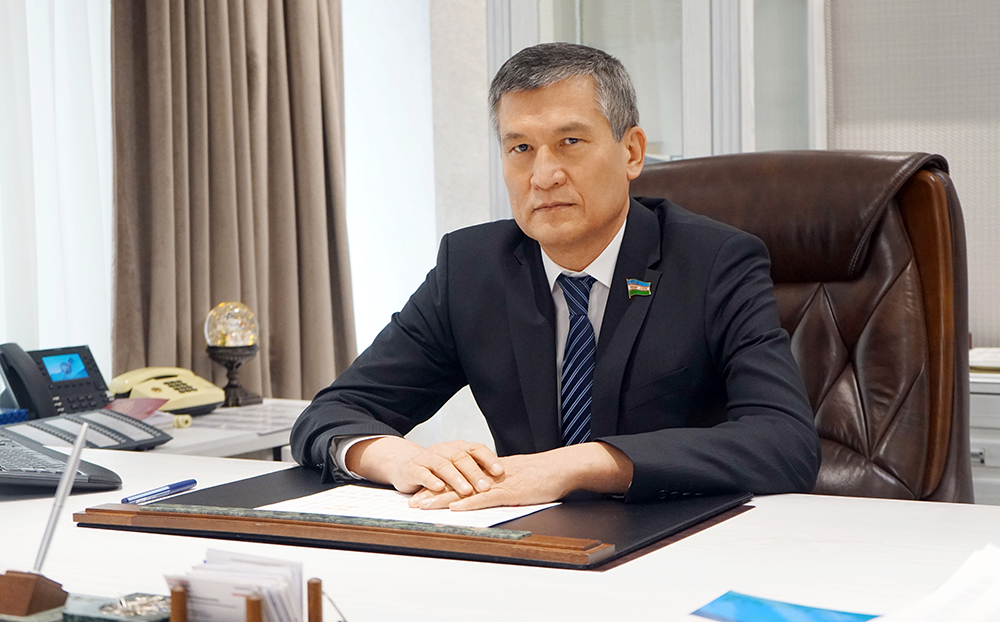 Dear workers of the Almalyk Mining and Metallurgical Complex, veterans of our production, citizens of Almalyk!

Today we are celebrating the 31st anniversary of the independence of our country, which is of incomparable importance for every citizen of Uzbekistan.

Despite the intensified competition, various contradictions and disagreements caused by the global economic crisis, we are achieving gratifying results in building a new Uzbekistan.

The thinking and outlook of the citizens of our republic are changing, our compatriots are feeling the results of the reforms taking place in our country every day, and our achievements are increasingly being recognized by the world community. The Development Strategy of New Uzbekistan for 2022-2026, aimed primarily at strengthening the achieved achievements with fundamental reforms, has become the main factor in the development of our country. Its main goal is to ensure human rights and freedoms, dignity and pride.

The priority tasks defined in the strategy encourage maintaining peace and stability in our country, strengthening inter-ethnic friendship, solidarity and tolerance between confessions in our society.

The Almalyk mining and metallurgical complex makes a great contribution to the growth of the economic potential of our country, its labor team uses its experience, knowledge and professional skills to fulfill the tasks assigned in connection with the implementation of investment programs, mining and processing, finished products, including high is aiming to increase the volume of value-added products.

Since the beginning of the year, the production of goods by "Almalyk Mining and Metallurgical Complex" JSC has increased by 117.4 percent at current prices. 623.4 million during the reporting period. Products were exported in the amount of US dollars, the forecast was fulfilled by 133.5 percent.

Thanks to the reforms initiated by the President of the Republic of Uzbekistan, Shavkat Miromonovich Mirziyoyev, Almalyk Mining and Metallurgical Complex has become known to the whole world as a reliable partner producing high-quality products. Today, our products are sold in 27 countries of the world.

It should be noted that over the past five years, the workers of the complex have increased the production of cathode copper by 40percent, gold by 17.2 percent, silver by 63.6 percent, copper pipes by 33.7 percent and zinc production by 19 percent were able to increase up to the total export of products increased by 2.5 times.

Continuous and comprehensive work is being carried out by the complex to expand the enterprise's raw material base, extract and process ores, and then increase the volume of finished products in cooperation with the State Committee for Geology and Mineral Resources, foreign companies, including the world-famous SRK company.

All our reorganization works are supported by the government of our country and personally by the head of our state, Shavkat Mirziyoyev. It helps us to move forward with more confidence, define perspectives and realize them.

To date, the largest investment project "Development of the Yoshlik I mine" is being implemented at the complex, within the framework of which the construction of the 3rd Copper Enrichment Factory with a value of 2 billion dollars is underway, the construction of the quarry is being completed, the preparation of other units that will be engaged in the transportation of ores, processing and receiving of finished products, and the efficiency of all technological chains is ensured.

The re-equipment of the main production facilities at the Copper Enrichment Facotry, Mechanical and Electrical Plant, Zinc plant has entered the final stage. Already today, the efficiency of the equipment is increasing, the economy of fuel and energy sources is being achieved and the improvement of industrial safety and working conditions is noticeable.

We are continuing to expand the assortment of high-value products within the framework of the established Copper cluster. The concept of its development was developed with the involvement of the Canadian consulting company HATCH.

The program for the development of the Scientific Production Association for the production of rare metals and hard alloys in 2022-2026 was developed and supported by the government of our country, this program envisages the implementation of about 30 projects at the enterprise.

To date, efforts are being made to involve the processing of man-made waste from the "Ingichka" tungsten mine located in the Kattakorgan district of the Samarkand region. However, in the near future we will be able to get our own tungsten concentrate!

The team of the complex is carrying out extensive research and development work in cooperation with the Academy of Sciences of the Republic of Uzbekistan, research institutes, including foreign universities, to improve the existing technologies, and at the same time master the production of new products. The first trial batch of platinum was obtained based on the technology developed by Almalyk Mining and Metallurgical Complex specialists, this development was registered in the Intellectual Property Agency of the Ministry of Justice of the Republic of Uzbekistan. The first batch of indium was produced in the laboratory conditions of the Zinc plant.

The "Digital Almalyk Mining and Metallurgical Complex-2030" Program is being implemented on a large scale in all workshops and divisions, and process automation is penetrating even deeper into production.

Despite the large volume of work related to the type of our activity, we continue to deal with the issues of strengthening the social base of Almalyk and the regions where our enterprises are located. In particular, the repair work has been completed in the preschool education organization No. 39 of the Social Facilities Department, the capital repair work has been started in the medical and sanitary department and the family polyclinic, preparations are underway for the opening of the reconstructed "Blue Mountains" recreation area and such examples can be continued. Also, the social assistance provided for in the Collective Agreement is provided in full. Tasks to improve workers' well-being are being implemented: salaries have been increased throughout the year, one-time bonuses have been given for two holidays, bonus money paid to women has become a good tradition.

A large amount of work is being carried out on beautification and greening of our city, including maintaining order and cleanliness in the areas of high-rise buildings and city streets within the framework of the "Green Space" program. The work carried out with young people in Almalyk Mining and Metallurgical Complex deserves special recognition. Brand-new equipment, new technologies and IT programs, automation of production - all this requires improved new knowledge and skills, at the same time, the objects being built will eventually become the workplace of hundreds of new specialists, and their training has already begun. With special emphasis on young people, we continue to cooperate with the leading higher educational institutions of our country, near and far foreign countries, secondary special education institutions, graduates of these educational institutions will undoubtedly join our team. In addition, new training programs are being developed and adopted in the field of qualification improvement, retraining, and acquisition of a second profession, as well as training aimed at increasing the level of knowledge of employees.

On the eve of the holiday, I would like to express my sincere thanks to every representative of our team of many thousands of real professionals - all active members of the movement of creators of New Uzbekistan for their hard work.

As I congratulate you on the Independence Day, I wish health, happiness, luck and new victories to all the workers of the complex, their family members, our respected veterans and fellow citizens! Let peace and friendship be the eternal foundation of our multi-ethnic tolerant society! Let our independent Motherland flourish under the clear sky!