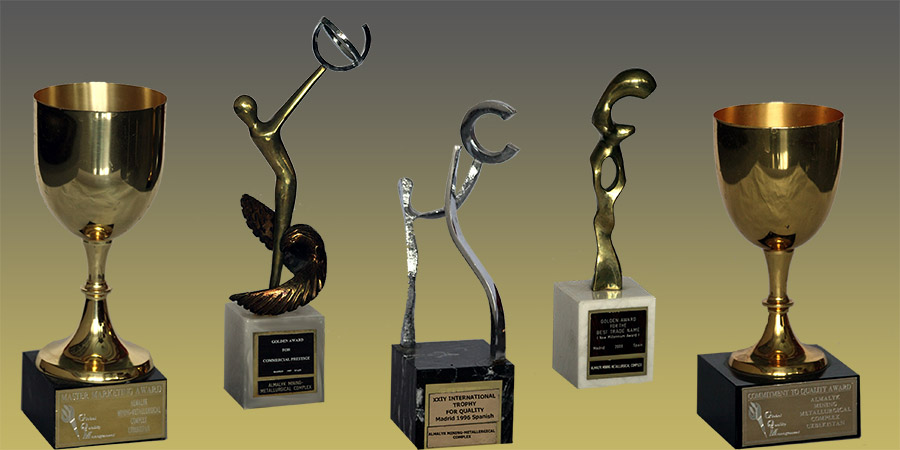 JSC ‘Almalyk Mining-Metallurgical Complex’, being one of the leading enterprises of the Republic of Uzbekistan’s metallurgical industry and one of the largest mining and metallurgical enterprises in the Commonwealth of Independent States (CIS), directs its foreign-economic activity to establish the enterprise at the world market as a producer of quality products and a safe business partner.

For this purpose, many programs are being under study, which can be achieved with product quality increase. At present, the Complex’ output includes over 18 kinds of products, and they are realized both within the country and abroad. And the export share is more than 70 percent of the total production volume.

Alongside with the main high-liquidity products, such as copper cathodes, which is realized in the world market, AMMC produces also gold, silver, metallic zinc, copper sulfate, cadmium, tellurium, ammonium perrhenate, etc.  It renders services regarding treatment of copper and zinc concentrates from various countries of the world. The copper cathodes quality level complies to LME Grade A, and the zinc metal meets LME High Grade. The gold and silver, made by JSC ‘Almalyk MMC’, has for many years been having the status of LBMA Good Delivery. The Complex’ export supply geography is very wide: Russia, Ukraine, Germany, France, Greece, the Nederland, Italy, Turkey, India, China, United Arab Emirates, Egypt, Qatar, etc. As a large producer of copper cathodes in the region, Almalyk MMC’ participates actively in foreign economic relations and maintains relations with various companies from countries like Switzerland, the UK, Turkey, Ukraine, Russia, China, etc.

As to its foreign-economic activity, the Complex conducts active investment policy with attracting international capital, within which in 2003 three year credit was obtained. The credit agreement agent is ABN AMRO Bank. The credit was extended directly to ‘Almalyk MMC’ by a first-class international bank syndicate without Uzbekistan Government guarantees, and so far there have been no precedent for this in independent Uzbekistan’s history.

Aiming at registering at LBM the copper cathode trademark of its own, the Complex, in 2005, erected and put into operation an automated copper cathode packing transfer line. During 2005, efforts were made to introduce at the enterprise the Quality Management System as per ISO 9001.

At present, the Complex is finishing construction of two large plants: Angrensky copper tube plant and Dzhizaksky cement plant. These objects are part of the investment project for making a new kind of products. Particularly, the Unitary Enterprise ‘Angrensky tube producing plant’ is created in the free industrial zone of ‘Angren’ with annual production capacity 8,000 tons copper tubes of various diameters. The unit is planning 95% of the product to be realized abroad. Organization of production of Portland cement and white cement in Dzhizak Region is implemented by erecting a new enterprise, where the Turkish engineering company Dal Teknik Makina is a general contractor.

Also, the Complex is an active participator of various top-level international conferences, forums, and meetings, held in various countries; it annually takes part in the work of LME Week, which is the most important event of the year for all players of the world non-ferrous metallurgy, and this adds to our enterprise’s authority and repute at the international arena.