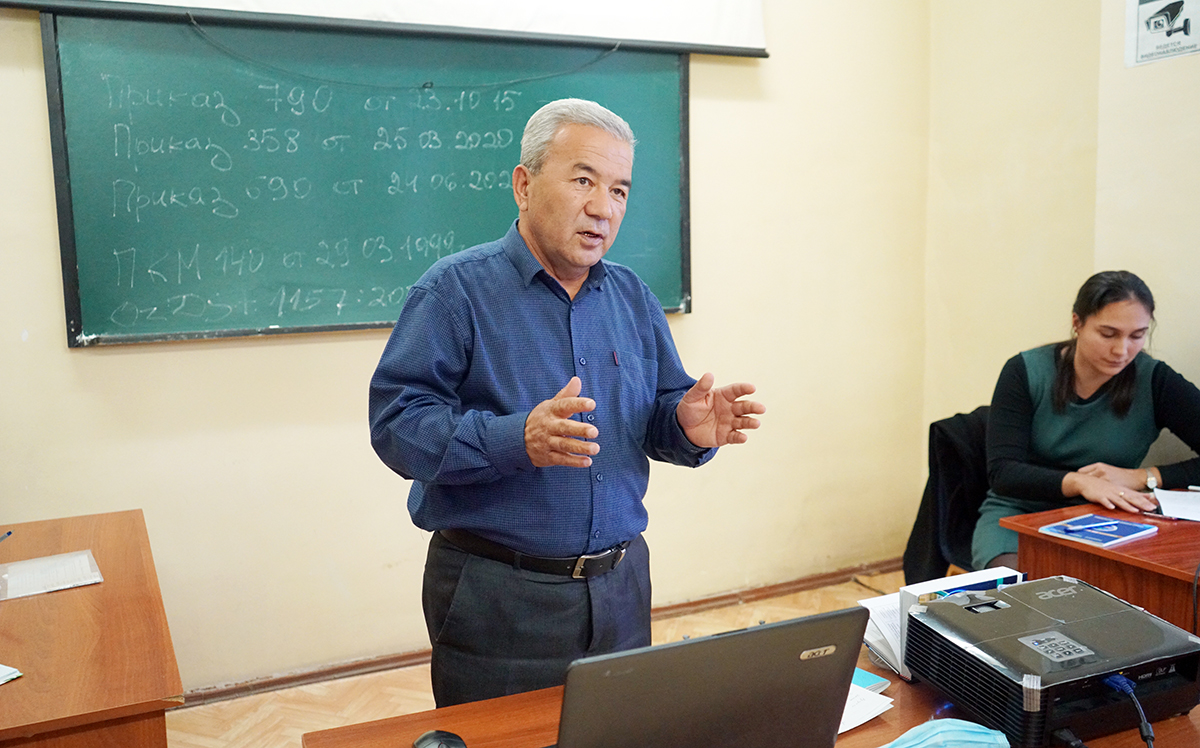 These tasks have been solved by the training center in “Almalyk Mining and Metallurgical Company” JSC for 20 years. Specialists of the plant have developed 391 training programs. Last year, 48 of them were improved and 31 were translated into the national language. There are 56 classrooms for 956 trainees at the TC and AMMC divisions. In order to improve employees’ qualifications and retraining, 244 adjunct professors were engaged from among the specialists of AMMC divisions. Training ranges have been set up at Management of specialized repair works, Rail Transport Management and Utility Vehicles Department.

Due to the current epidemiological situation, along with the traditional ones, we have introduced a new form of training: online (distance learning) using the Zoom platform.

In 2021 it was planned to improve the qualifications of 8116 employees of the plant: 6,447 workers and 1,669 engineers and technicians. But in connection with production needs, increase of existing capacities, as well as on behalf of AMMC management 7729 workers were actually trained, which amounted to 129.0%, and 1744 engineers and technicians (104.0%).

One form of quality professional development is the mentoring system. In 2021, 53 experienced employees of the plant’s divisions trained more than 150 of their colleagues, who can now also act as mentors.

Professional skill contests organized by the administration, trade union committees, the Youth Union and the training center are very popular among young workers of AMMC. Winners of such contests automatically increase their qualification category.

In connection with the widespread introduction of the “1C Bukhgalteriya” computer program at AMMC, 63 employees of the plant attended the corresponding courses. More than 250 people from among the heads, economists, financiers, accountants of AMMC divisions expanded their knowledge in the field of economics, which was shared by the lecturer of the Academy of Public Administration under the President of the Republic of Uzbekistan, Professor Mikhail Khamidulin. Power engineers of the zinc and copper smelting plants took part in a seminar that was held in Kazan at the State Autonomous Institution “Center for Energy and Resource Efficient Technologies” of the Republic of Tatarstan. Four employees of Administration were trained remotely at Inha University in Tashkent to study the financial program “Oracle Database 12c R2”.

The training center organized courses on computer literacy, corporate governance, and the study of the Uzbek alphabet based on the Latin orthography, as needed for production purposes.

Teachers, music teachers, and speech therapists of Preschool Educational Establishment of Social Facilities Management underwent training in accordance with the Regulations on professional development of AMMC.

372 students of the branches of universities in Alamalyk were trained under the dual system. More than 1,200 students completed various internships, and 94 were given study tours. 374 students used a specially created Telegram channel to practice during the pandemic.

35 specialists of the plant participated in the work of the Almalyk Branch of the Tashkent State Technical University. In addition, 103 students from various universities successfully passed the selection process and were offered employment at AMMC.

In order to train personnel in the construction industry and IT technology, a memorandum of cooperation was signed with South Korean universities Inha and Aju in Tashkent.

According to the Decree of the President “On Additional Measures for Development of Mining and Metallurgical Industry and Allied Industries” dated June 24, 2021, a service for development of the copper industry cluster was established at AMMC. A number of professional development curricula have been reviewed and developed to train specialists at the appropriate level. Already, the classes on mechanics are conducted by representatives of the teaching staff of the TashSTU and on mining by the teaching staff of the AB of NRTU MISIS. Similar courses in metallurgy, mineral processing, production automation, etc. are planned for this year.

The Almalyk Mining and Metallurgical College is assigned to “Almalyk MMC” JSC, this year it was repaired at the expense of the plant for more than 2 billion 885 million UZ Soums. The college’s training workshops are assigned to a number of AMMC divisions to provide the necessary assistance.

In 2021, 475 students of this college had an internship at the Combine. In addition, apprenticeships were organized for the job training instructors.

The training center is engaged in training and retraining not only employees of the plant. This year AMMC helped 1305 young men and girls from socially unprotected families living in Almalyk and nearby settlements, recorded to the “iron” and “youth” notebooks and have no specialty, to get in-demand professions. In pursuance of the government’s order, AMMC, together with the Almalyk town Employment Center, the City Chamber of Entrepreneurs and the Youth Affairs Agency, organized relevant short-term courses. 1,153 trainees received certificates of proficiency, 56 are continuing their training, 66 are employed at AMMC, 11 are employed and 536 will be employed stepwise in at Enter Engineering, and 122 have made provision for their own employment.

A new year has begun, which will also be filled with fruitful work. I would like to take this opportunity to wish the employees of AMMC - the trainees of our courses - success in mastering of the new knowledge!