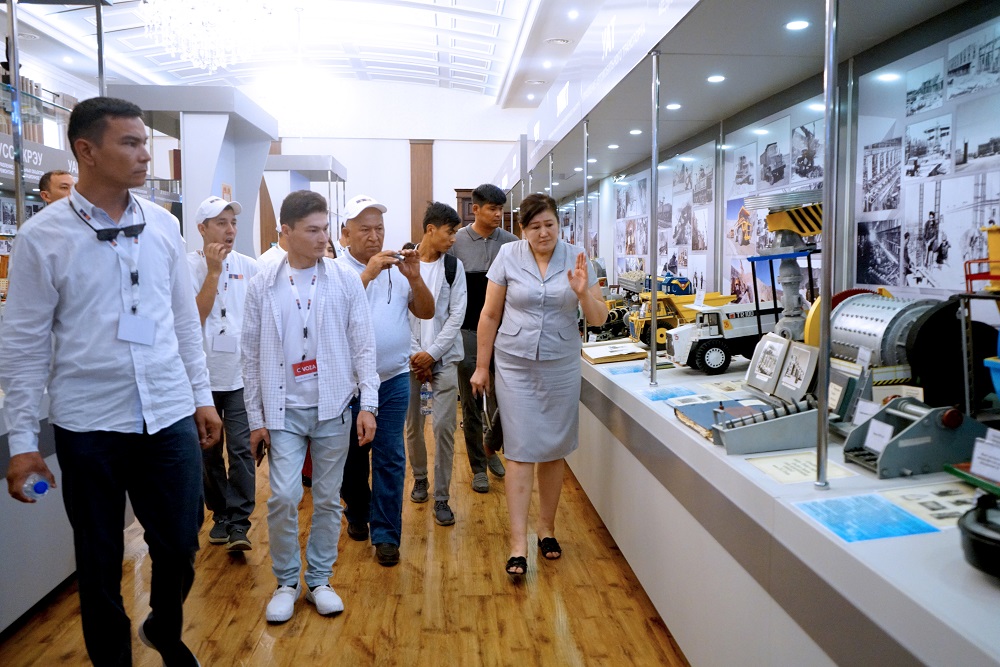 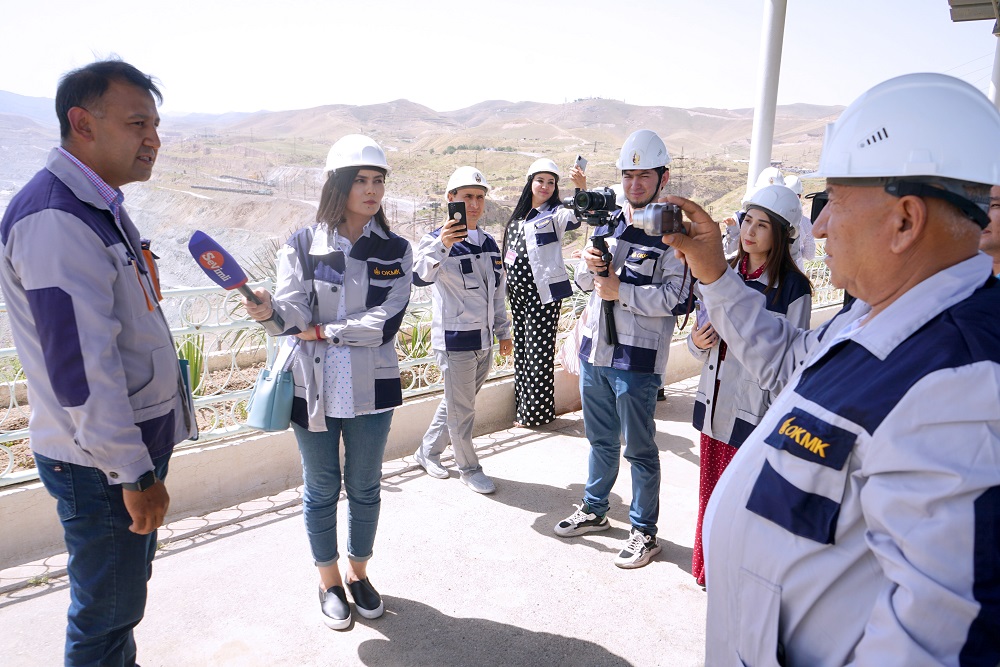 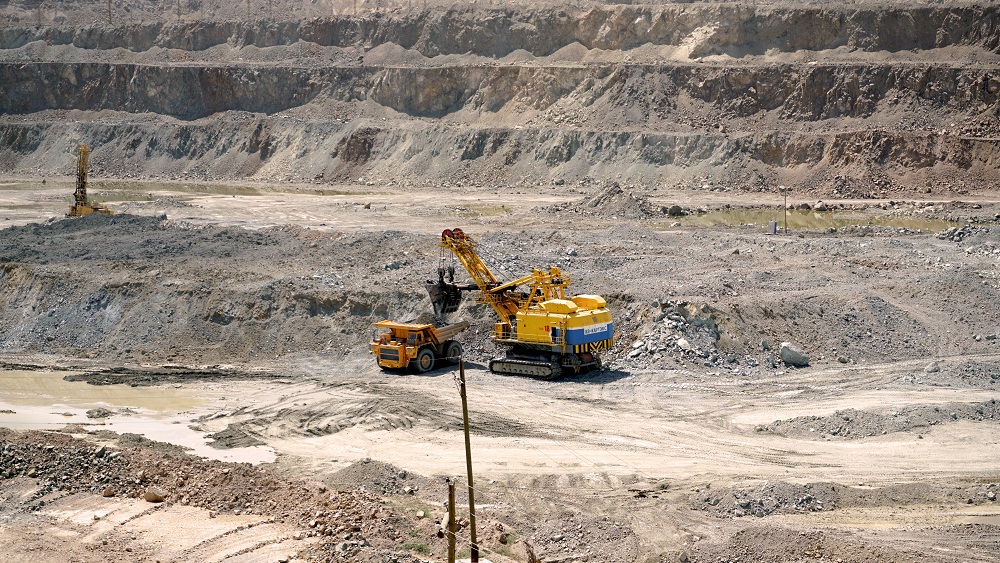 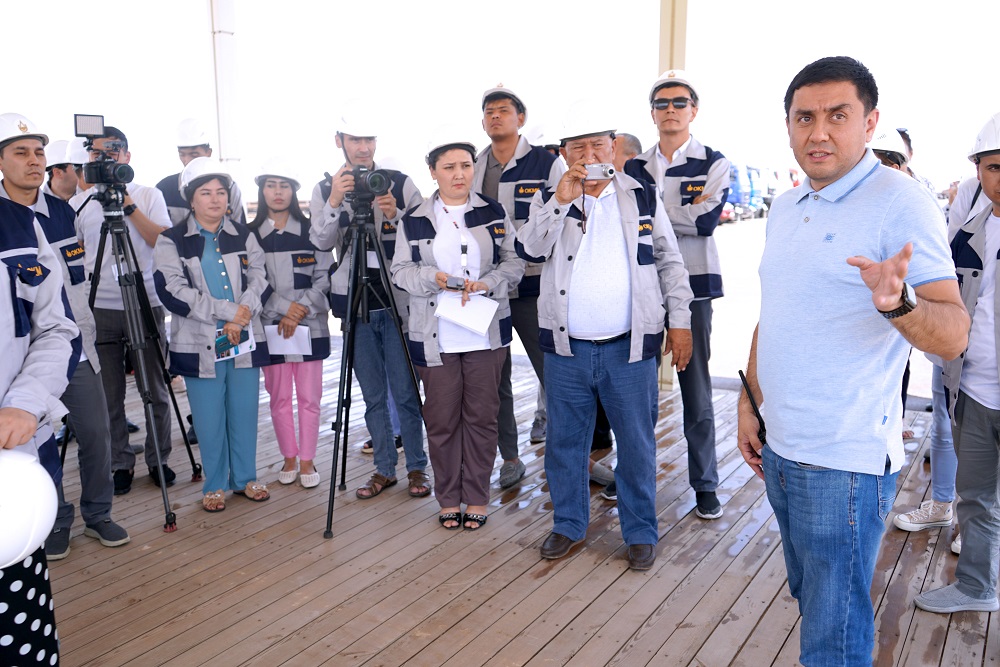 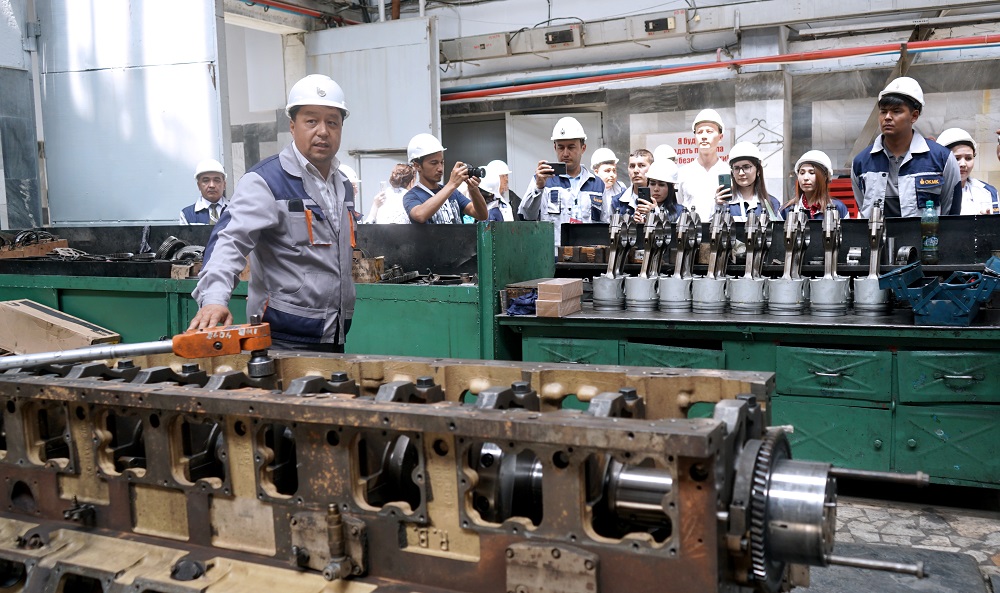 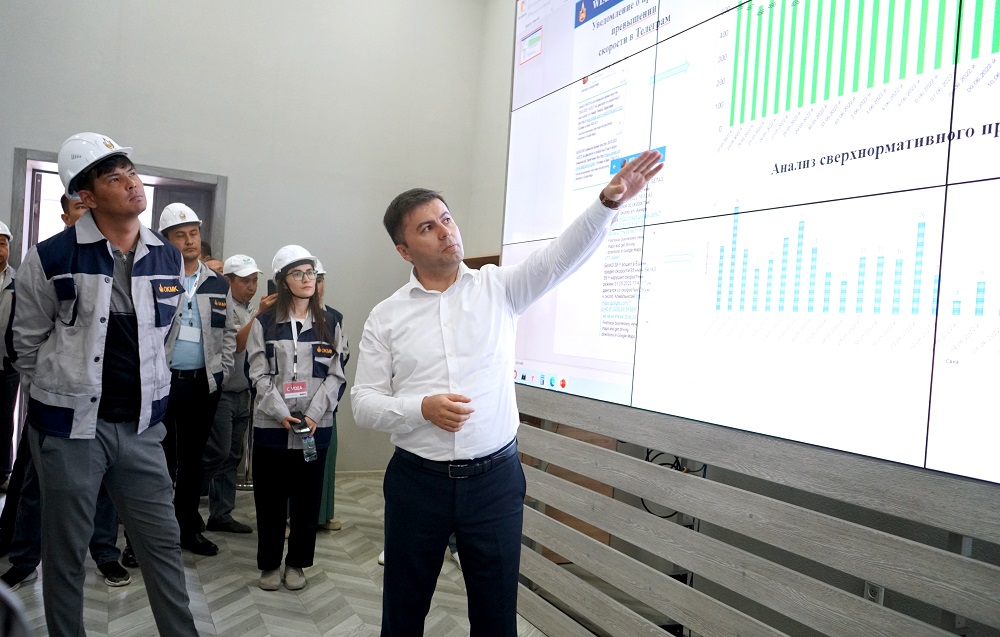 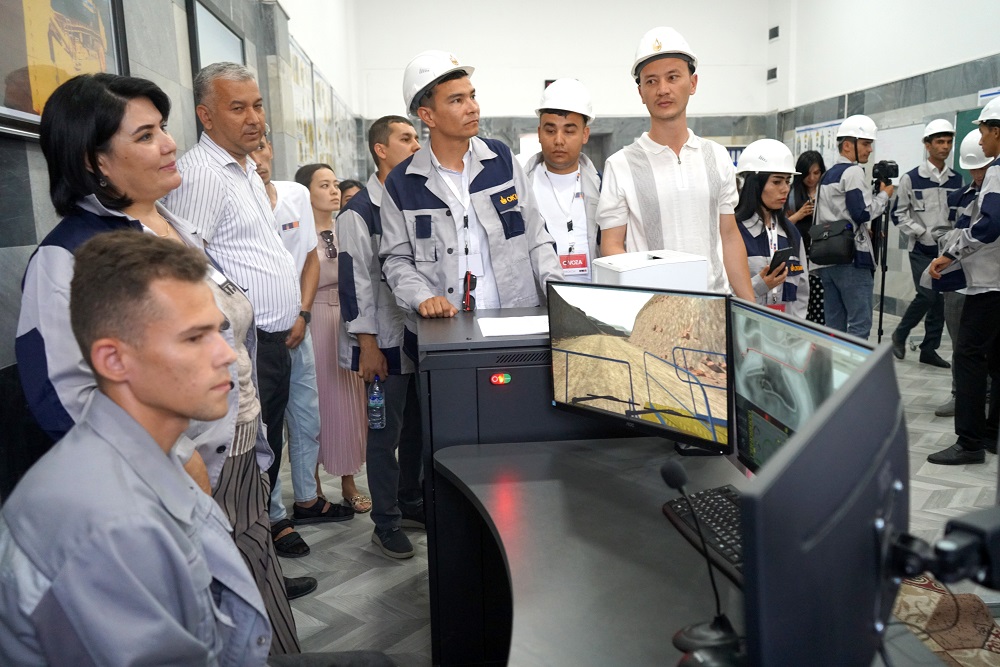 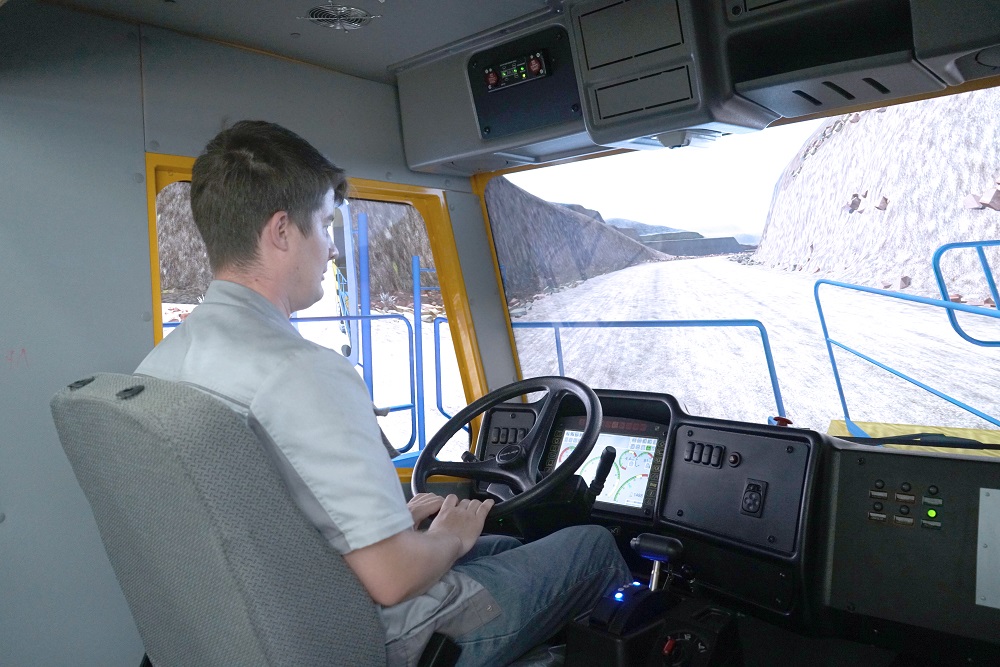 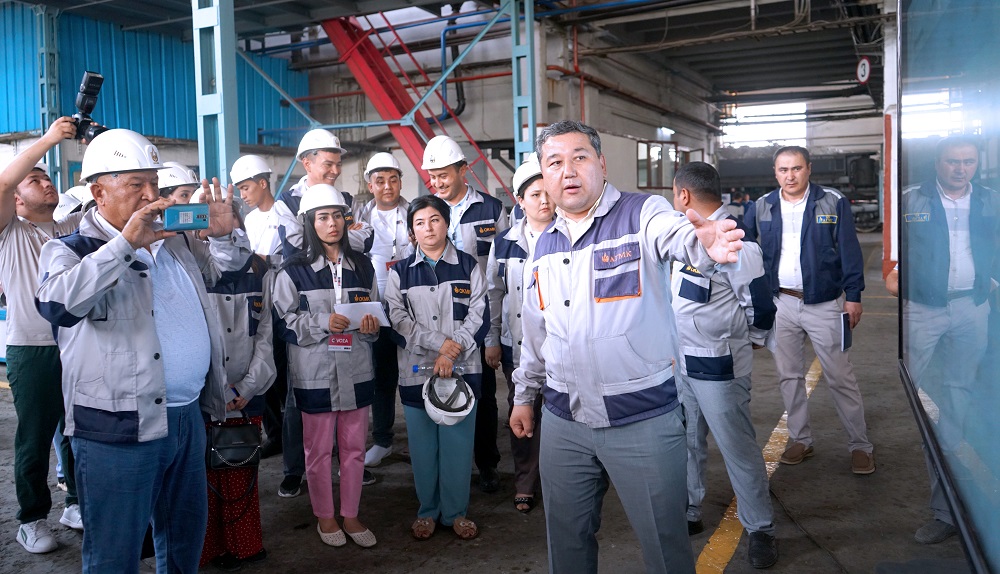 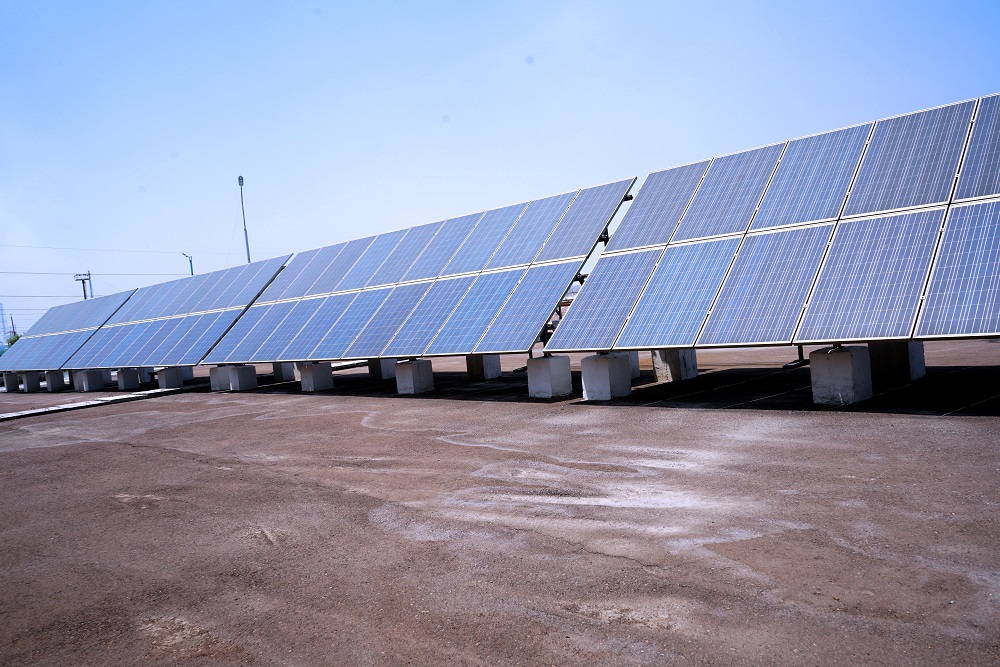 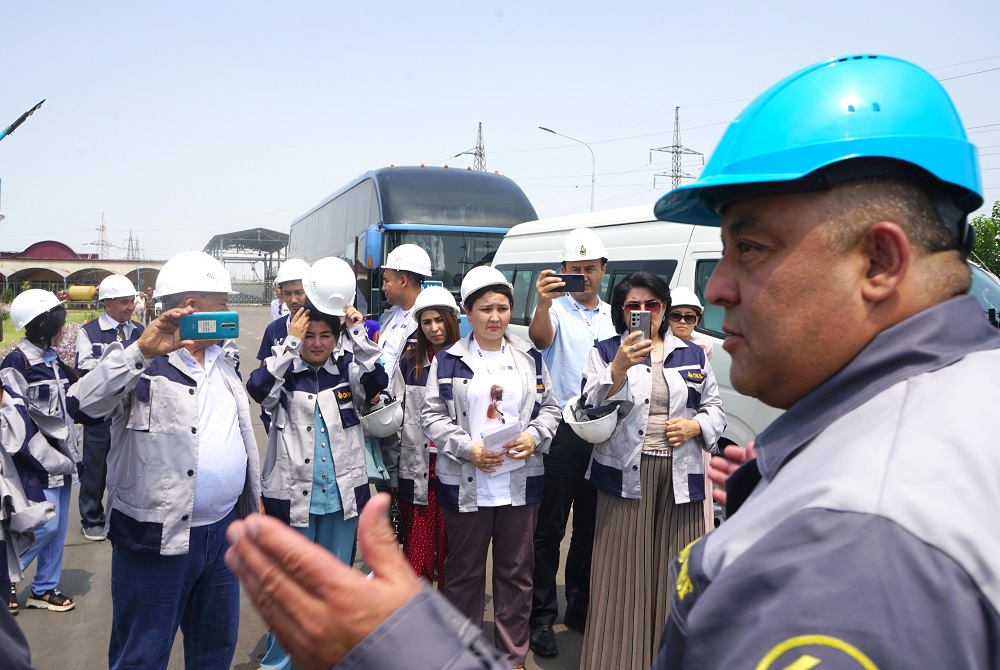 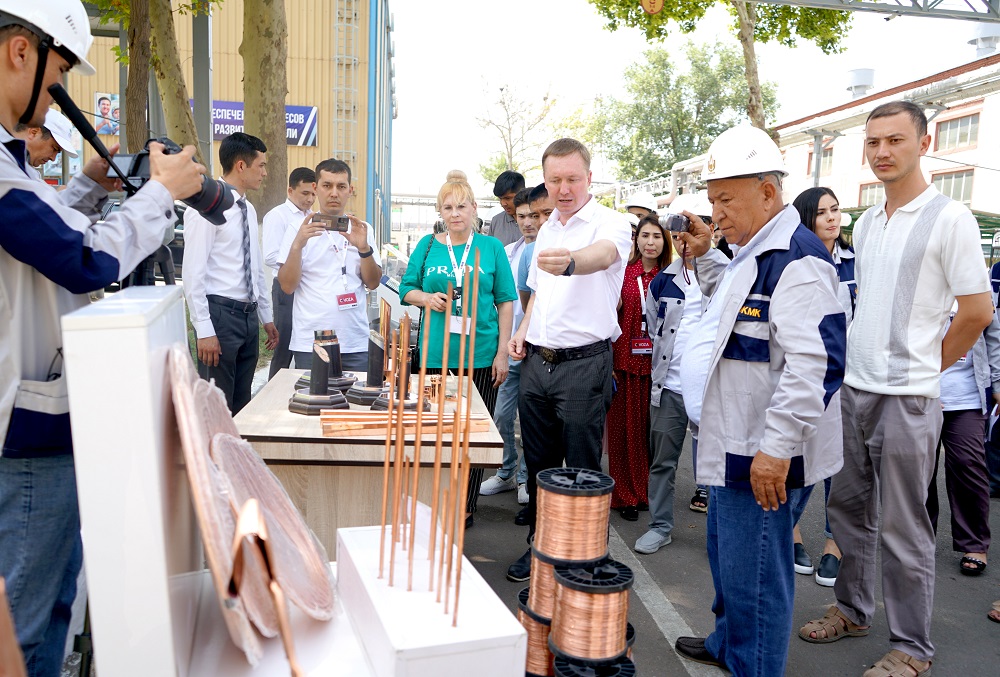 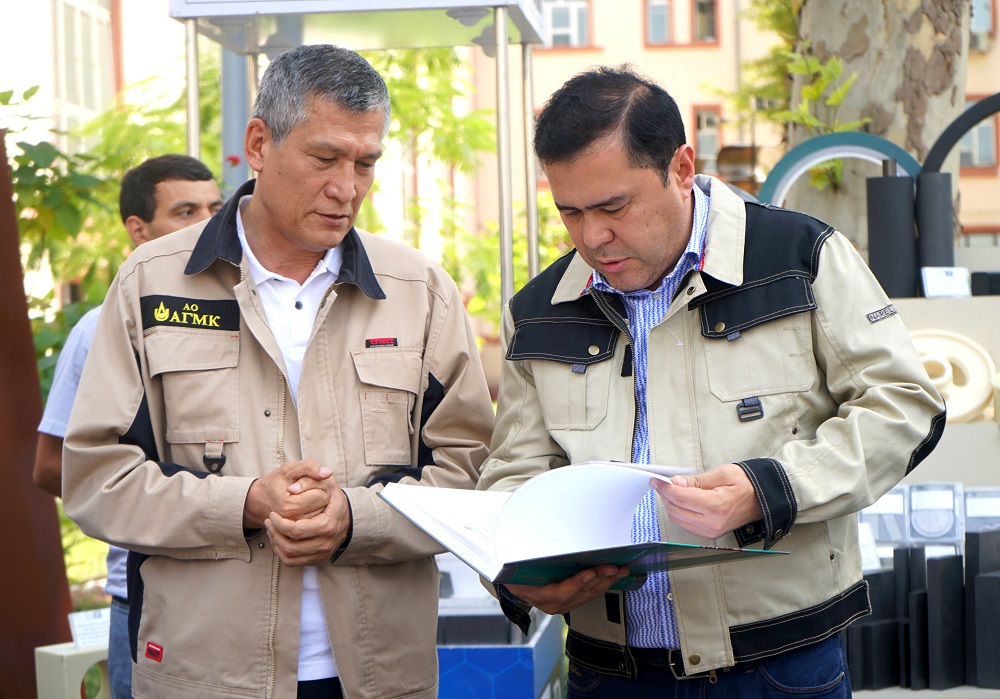 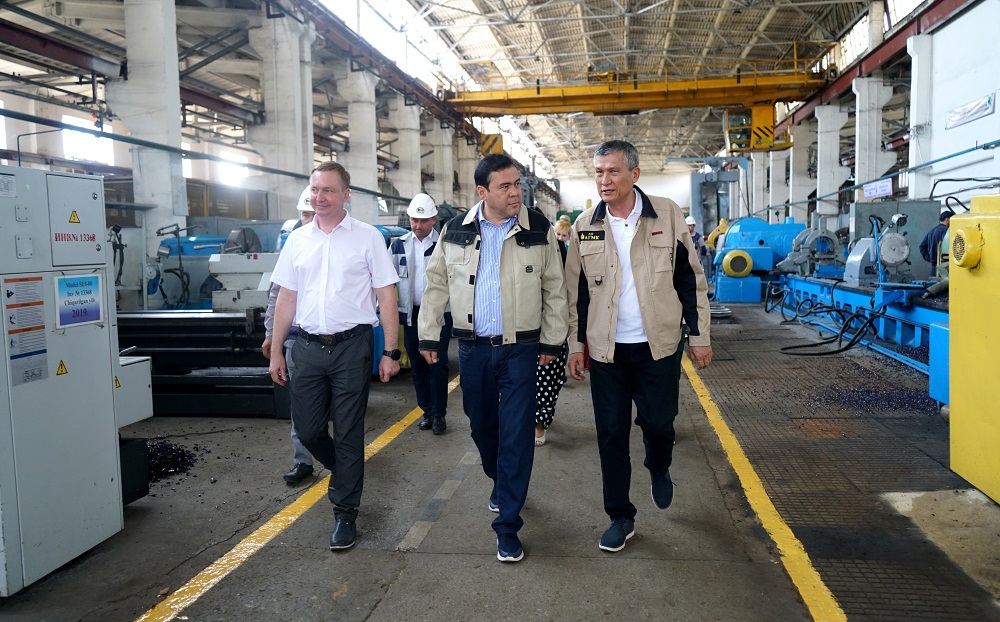 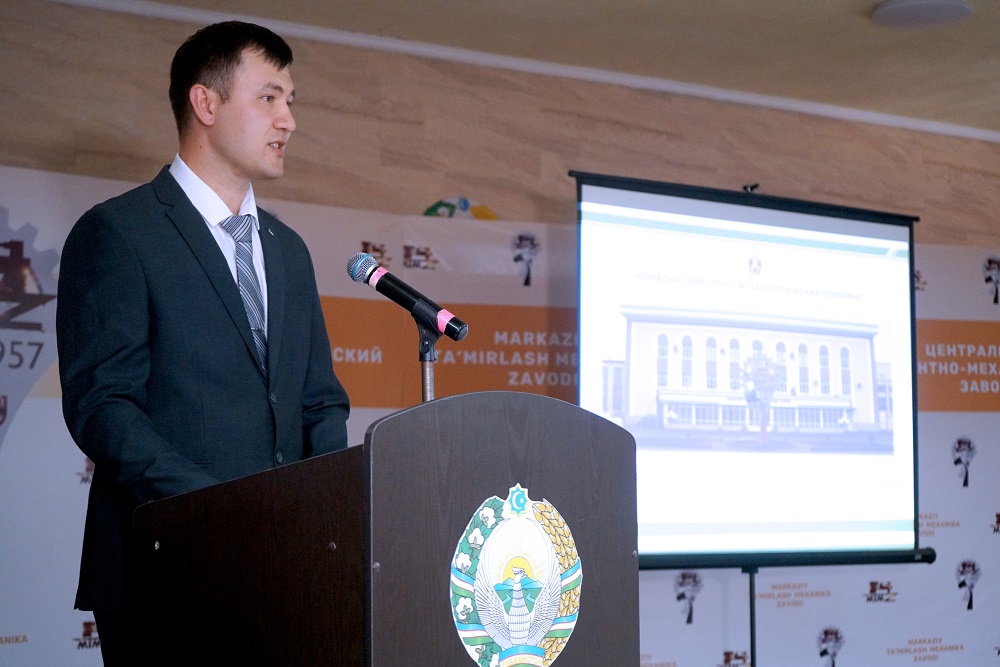 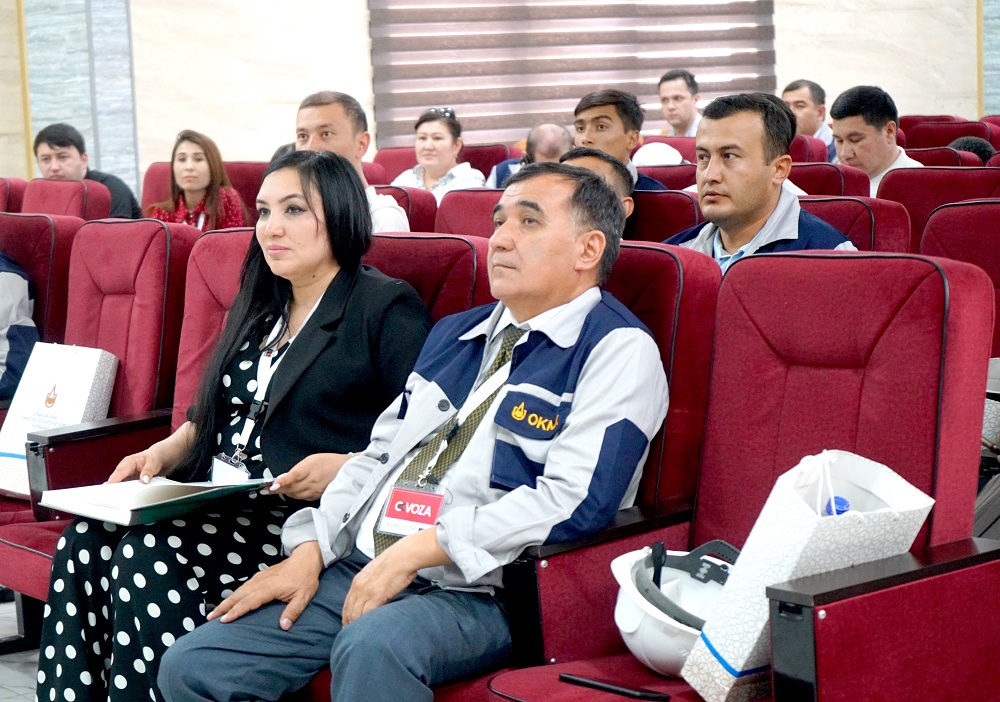 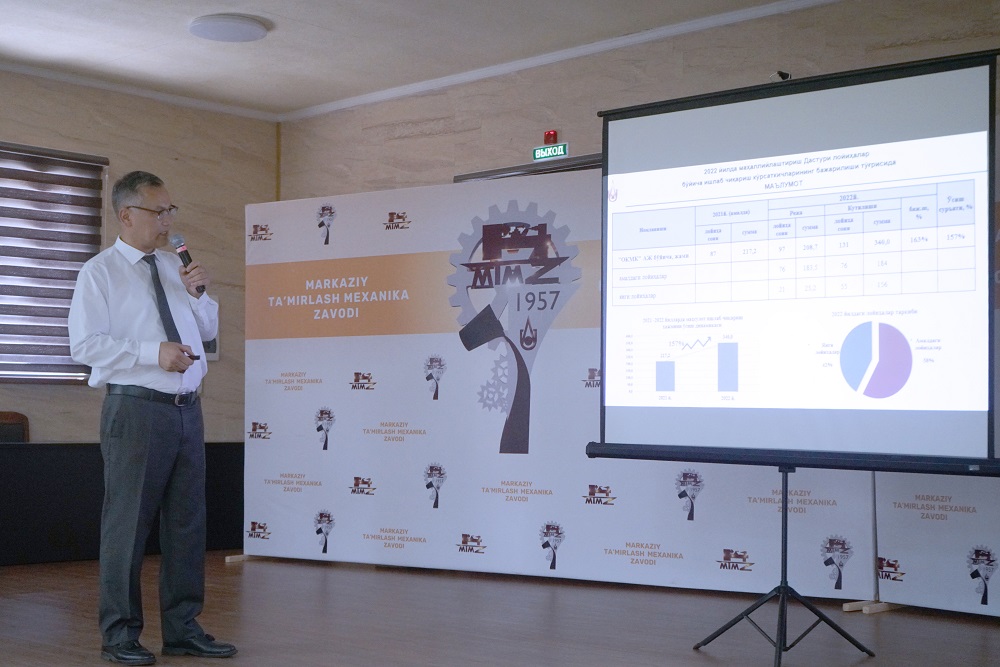 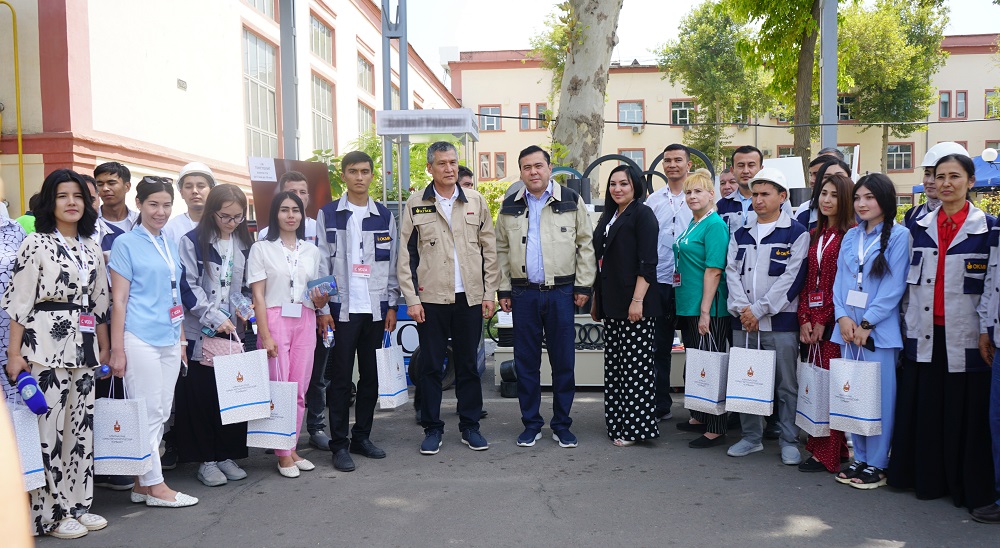 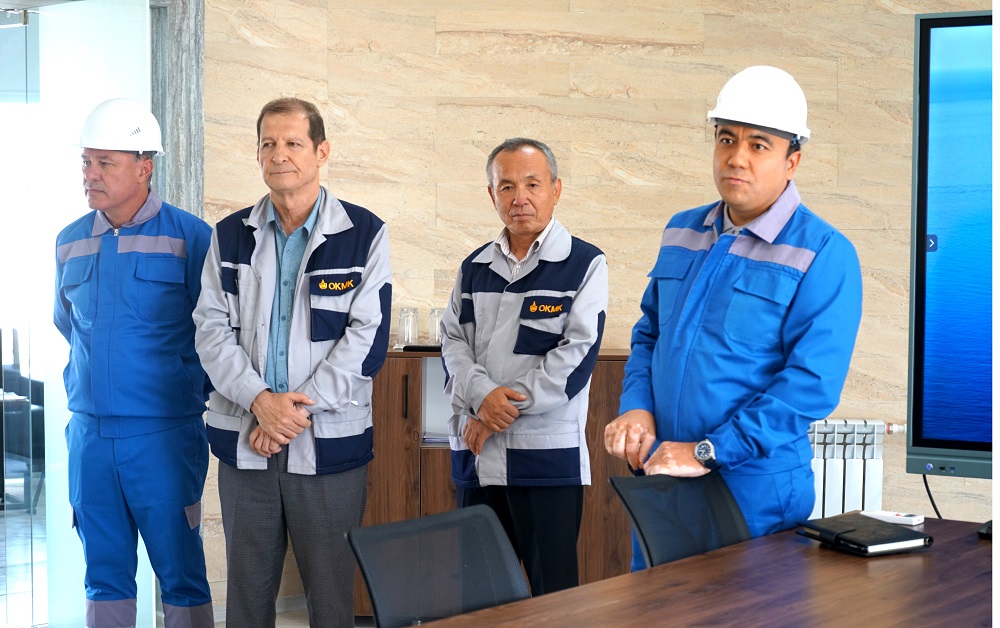 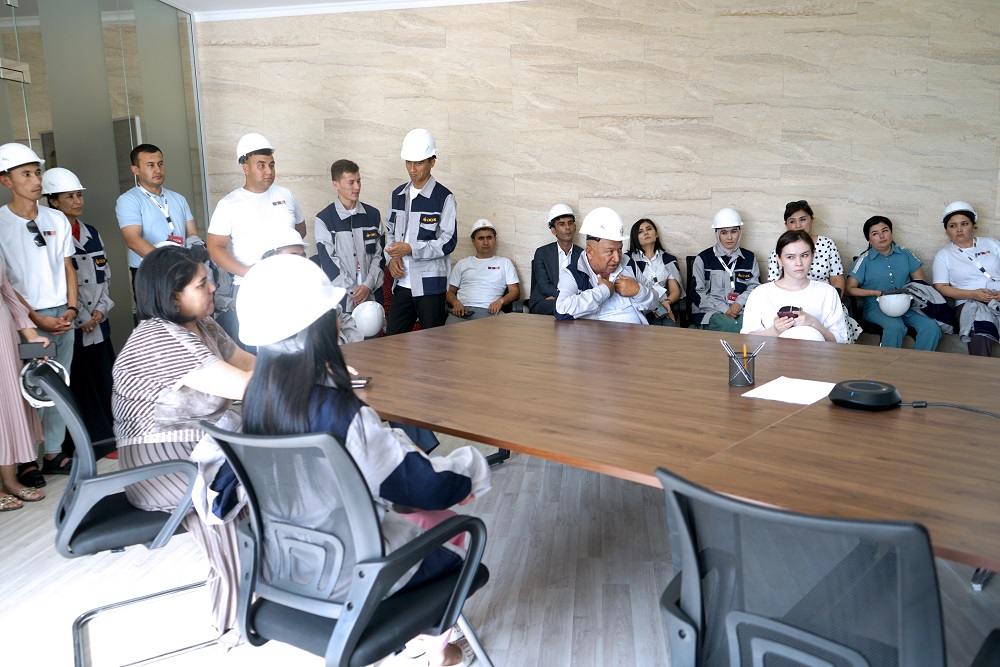 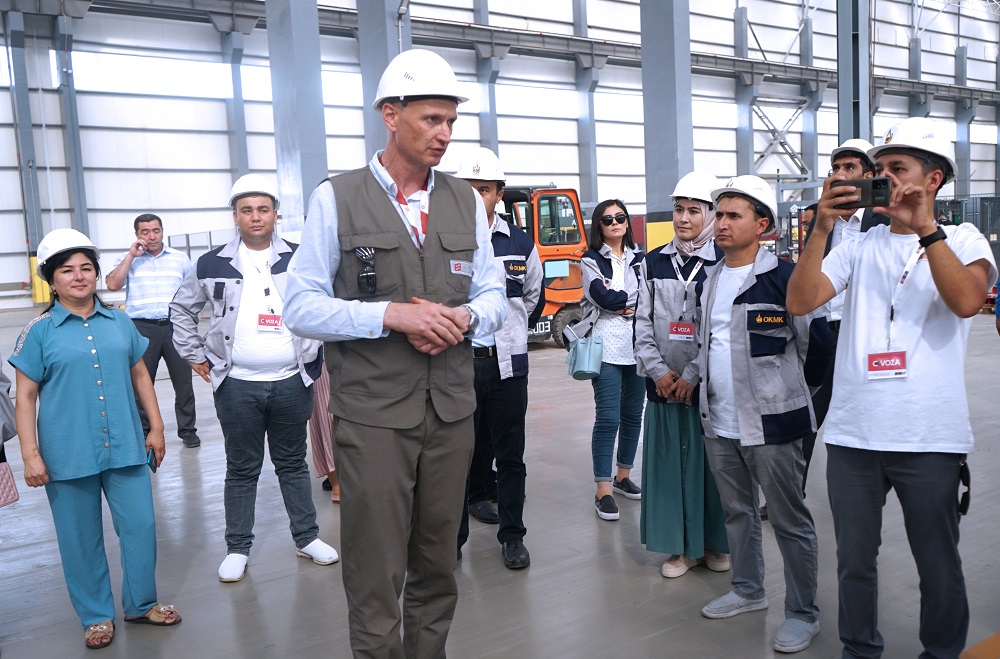 As previously reported, these days Tashkent is hosting the media week "Ovoza", dedicated to June 27 - the Day of Press and Mass Media Workers.

On the third day of the media week, organized by the National Media Association of Uzbekistan, media representatives visited the Almalyk mining and smelting plant.

As part of the media week, a press tour to the AMMC was organized for media representatives.

First, the participants of the press tour got acquainted with the activities of the plant's museum. Then the guests went to the Kalmakyr mine and the Yoshlik I deposit.

The investment project “Development of the Yoshlik-I deposit” is being implemented in accordance with the Resolution of the President of the Republic of Uzbekistan dated March 1, 2017 No. PP-2807 “On measures to expand the production capacities of Almalyk MMC JSC on the basis of the Yoshlik-I deposit”. As of June 26 of this year, the total amount of excavation work performed to reach the ore layer of the Yoshlik I deposit amounted to 121.3 million cubic meters.

The journalists were greatly impressed by the exhibition of mining equipment, BelAZ dump trucks, organized at the observation site of the deposit.

Digitization at AMMC on the example of the transport industry

In recent years, the plant has carried out significant work on digitalization. This creates opportunities for achieving high efficiency in production.

During the press tour, the mass media representatives got acquainted with the work carried out in the technological transport department in this direction.

As part of the transformation of Almalyk MMC JSC, by order No. 81 dated January 26, 2022, the plant approved a work plan consisting of 27 measures (for 234 billion UZS) aimed at increasing the level of automation of business processes and technological processes of the plant, and more than 30 additional projects, says Abdulla Azizov, Deputy Chairman of the Board of Almalyk MMC JSC. 450 vehicles were systematized on the basis of the Wialon software for the system of GPS-monitoring of vehicles and fuel control, and licenses for them were purchased. This includes 2,200 AMMC vehicles, and reporting forms are maintained in Real-Time mode.

These days, at the cement enterprises of the plant, work was completed on the implementation of the "System for automated control of the process of shipment of finished products." In particular, thanks to the introduction of this system at the Sherabad cement plant, the speed of service has increased by 2 times: the efficiency of work with documents has increased, the processes of weighing and shipping products have been automated, which is under constant video surveillance. The Jizzakh cement plant now uses not only new software, but also modern electronic scales with a load capacity of 100 tons.

Over the past 5 months of this year, AMMC completed 14 projects, including improved electronic document management systems and e-mail, installed software for the information system of the mining and geological complex, expanded the functions of GPS monitoring of vehicles and fuel control systems.

In addition, as part of digitalization, more than 60 projects are planned to be implemented at the plant by the end of 2022.

Localization in the railway industry

“In pursuance of the Localization Program, the industrial railway transport department mastered the production of 29 types of products in the amount of 3 billion UZS in 2021,” Bunyod Kurbonov, head of the Production Railway Transport Dept., told reporters. For 5 months of this year, products worth 3.40 billion UZS were produced. To date, cooperation has been established with the Tashkent enterprise "Foundry and Mechanical Plant". During the reporting period of the current year, 13 types of products were mastered for a total of 355.0 million UZS.

Also, media representatives visited a photovoltaic station - an alternative source of energy, built in the railway workshop No. 3 of Production Railway Transport Dept. The power of this station is 112 kW/h. It provides electricity to office and utility rooms in the administrative (4-storey) building of the Railway Shop-3 and a section for the repair of diesel locomotives. This is 5% of the average monthly electricity demand of this workshop. In the future, it is planned to expand the possibilities in this direction and provide an average of 37,830 kW of electricity per month for the production needs of the railway shop No. 4, the carriage service, and the non-metallic building materials quarry of the Production Railway Transport Dept.

The localization of production at the AMMC is carried out mainly in two directions: the first is the expansion of cooperation ties with local operating manufacturing enterprises and business entities, the second is the localization of the production of import-substituting products at the expense of the existing and new capacities of the plant, - says the head of the localization department during his presentation Dilshodbek Holdaraliev. As part of the Localization Program at the AMMC in 2021, it was planned to produce products worth 161.4 billion UZS for 87 projects under 87 projects. The actual output was 217.2 billion UZS, the forecast was fulfilled by 134.5%.

The main executors of the Localization Program at the AMMC are the central mechanical repair and zinc plants, as well as the research and production association for the production of rare metals and hard alloys.

In accordance with the Program, the production of 21 new types of products worth 25.2 billion UZS has been mastered, and since May, an additional 11 new product projects worth 28.2 billion UZS. These are products made of hard alloys - drill and milling cutters, coating for stone crusher mills, ceramic products resistant to high temperatures, tungsten anhydride, armor for crushing equipment, foundry products.

In particular, as of January-May 2022, it was planned to produce products for 108 projects under the localization program in the amount of 91.4 billion UZS. In fact, this amount amounted to 117.04 billion UZS. The volume of production increased by 160.3% compared to the forecast. The forecast was fulfilled by 128%. In particular, the central repair and mechanical plant manufactured products worth 69.2 billion UZS, the scientific and production association of rare metals and hard alloys - worth 26.8 billion UZS, and the zinc plant - worth 21.03 billion UZS. As for the export of products manufactured under the program, a result of 431.7 thousand US Dollars was achieved.

According to the results of five months of this year, 11 more projects will produce products worth 28.2 billion UZS. For example, in the research and production association of rare metals and hard alloys, four new projects will produce tungsten and molybdenum carbide, carbide bushings. At the same time, the efficiency of import substitution will reach 2.52 million US Dollars.

In addition, according to 19 projects, it is planned to develop import-substituting products that were not previously produced in our country for JSC Uzmetkombinat, SE Navoi MMC, JSC Uzbekkumir and other giant enterprises.

Also, media representatives met with the Chairman of the Board of Almalyk MMC JSC, Senator Abdulla Khursanov and Chairman of the National Media Association of Uzbekistan Sherzodkhon Kudratkhodzha. During the meeting, the guests received full information about the work carried out at the modernization plant.

At the end of the press tour, the guests visited the construction site of the copper processing plant-3.

Within the framework of the investment project “Development of the Yoshlik1 deposit”, work has begun on the construction of a copper processing plant No. 3 with a processing capacity of 60 million tons of ore per year.

For the construction of MOF-3, a construction site with an area of ​​106 hectares was identified. The consortium of the industrial construction leader in the Central Asian and Russian market Enter Engineering (EE) and the enterprises of the machine-building division of Gazprombank - PJSC Uralmashzavod are participating in the construction of the copper processing plant No. 3 of the AMMC.

Under the project, Enter Engineering and Uralmashzavod will jointly build a factory for the plant on a turnkey basis. Enter Engineering will carry out the construction of the facility and design work. And the Ural Heavy Machine Building Plant will supply complete technological equipment. For MOF-3 with an annual capacity of 60 million tons, UZTM-KARTEX will supply more than 100 pieces of equipment, including large-sized mills, crushing and lifting equipment, cone crushers for secondary crushing, press rolls, various screens, sections of flotation machines with a volume of 300 cubic meters and other equipment.

The new plant of the AMMC will include warehouses for coarse and finely crushed ore, a building for medium and fine crushing, a main building with grinding, flotation and dehydration departments, a hydrometallurgy shop, a storage and shipment area for finished products, repair and mechanical workshops, a tailings facility and other divisions.

It should be noted that with the commissioning of the new AMMC facility, more than 6,000 new jobs will be created.

During the press tour, media representatives got acquainted in detail with the work carried out at the AMMC as part of the implementation of the Plant's Localization and Digitalization Program.